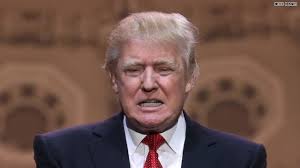 I have been trying to avoid the many puns that could be used with Donald Trump’s name, so far successfully.  I have Tweeted dozens of messages about him to the point that I’ve had to review my Twitter feed and delete some Tweets just for the sake of cleaning it up.

Yes, I am obsessed with him, but I will argue that it’s a healthy obsession.  He cannot become president.  He cannot even become the Republican candidate.  I have used every platform I have to share the reasons why.  It has been pointed out in the press and on social media that he meets the definition of a fascist, and that has gone from being a sort of heavy-handed mockery to an actual statement.

I hope my tone has been appropriate.  I hope it has been strong and not strident.  I hope to God that he pulls out or is disqualified so we can stop focusing on his peculiar combination of vapidity and madness.  If not, I will keep writing about him, and talking about him, for as long as it takes.