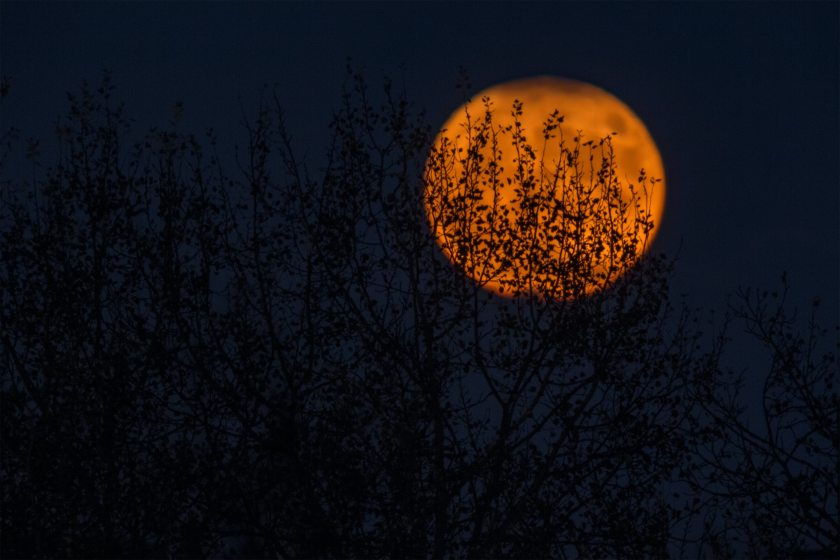 This originally appeared on the Armand Bayou Nature Center’s Wild About blog.

Cooler weather and shorter days are coming up fast. One of my favorite things in the autumn is observing the moon.  The skies seem a little clearer and the air a little brisker.

At Armand Bayou Nature Center, our family night hikes begin in time to watch the moon rise over the prairie.  I have the pleasure of being a trail guide in training – meaning I get to accompany the lead guide and our guests.  When I’m not shining my red flashlight into the woods on the lookout for some of the preserve’s wildlife, I get a view of the skies over the prairie (note: using red light prevents blinding the animals).

Sometimes at ABNC, it feels so much like I’m out in the country that it’s hard to believe I was just in the suburbs, navigating the infamous Houston traffic right before I turned onto the drive.

I learned an interesting fact recently: Armand Bayou Nature Center’s namesake, Armand Yramategui, was an enthusiastic sky watcher.  In fact, his name means “searcher of the skies.”  He was also the curator of the Burke Baker Planetarium.  And of course, NASA’s Johnson Space Center, mission control for the moon landing, is just a few miles away.

Given all that, I was intrigued to hear about International Observe the Moon Night, a decade-old event being held this year on September 26.  It’s an initiative of NASA and other space organizations to encourage people to observe the moon in whatever way they can and document what they see. It’s held every September or October when the moon is in first quarter and easy to observe. Organized public and private observation events are held around the world.

Jimmy Newland, an astronomy and physics teacher at Bellaire High School, organizes an observation event every year.  Because of COVID-19 restrictions, this year his event will be virtual.  But Newland has adapted. On Sunday, September 27, he will set up his telescope in his backyard and connect his smart phone to it, providing a view directly from the eyepiece and broadcasting it to the participants in his virtual event.

Newland told me there have been changes recently that have expanded the perspective of participants.  “It’s been interesting to tie it to different cultures,” he told me. “The moon is part of human history, so the event is also about human culture and the role the moon has played.”   It sounded to me like something Armand Yramategui might have said.

I talked with Andy Shaner, Public Engagement Lead at the Lunar and Planetary Institute. He will be the emcee of a marathon observation session that will be broadcast live on NASA TV and across NASA’s social media.   “The whole point,” he told me, “is for everyone to go out, look at the moon and learn more about it and learn about lunar exploration.  It could be as simple as stepping outside and looking up at the moon or going online.”

The website for Observe the Moon Night has a place to enter your observations, including photos. “We encourage everyone to go to the website and register what you saw,” Shaner explained. “Enter your name on the site and put a dot on the map.”

Although Jimmy Newland and his students can’t be together this year on International Observe the Moon Night as they have in the past, he is excited to extend an invitation to the public to his online event on the 27th.  If you want to join him, go to the website and enter “Houston” in the search field.  His event and his contact information will come up.

I’m scheduled to be a trail guide-in-training on four night hikes in October.  I’m especially excited about the Halloween Night Hikes being held on October 30 and 31 during the full moon.  I’ll be there on the 30th, probably trying to snap a photo of the moonrise.  Join me and other ABNC volunteers and staff – make a reservation for a hike and enjoy some scary good fun under a rising moon.

Eric Heber was a champion for hiking in Louisiana. I had the honor of writing about him twice - once for @thetrek.co and once for @countryroadsmag . This time around, sadly, what I wrote was a remembrance of him. His advice, detailed maps, videos and easygoing personality are all missed. His family is in my thoughts. Visit the link in my profile to read my thoughts about him and his legacy. #louisianahikes
#EidMubarak #Eidulfitr #Eid2022
It was a pleasure writing about Gabrielle Deonath's new book, Shukr - almost as much fun as getting to know her. #SmartYoungLady #shukr
Very gratifying to see my name on the National Association for Interpretation website - two months after taking the course, I'm on the official list! #certifiedinterpretiveguide
All set up for today’s pollinator demo! I’ve got my “monarch” crown on and everything! Always happy to be at @armandbayounaturecenter !
From the reported words of Prophet Muhammad (PBUH): Whoever fasts Ramadan out of faith and seeking reward, his previous sins will be forgiven. Whoever stays up and prays on Laylat al-Qadr out of faith and in the hope of reward, his previous sins will be forgiven. Whoever prays at night in Ramadan out of faith and the hope of reward, all his previous sins will be forgiven.