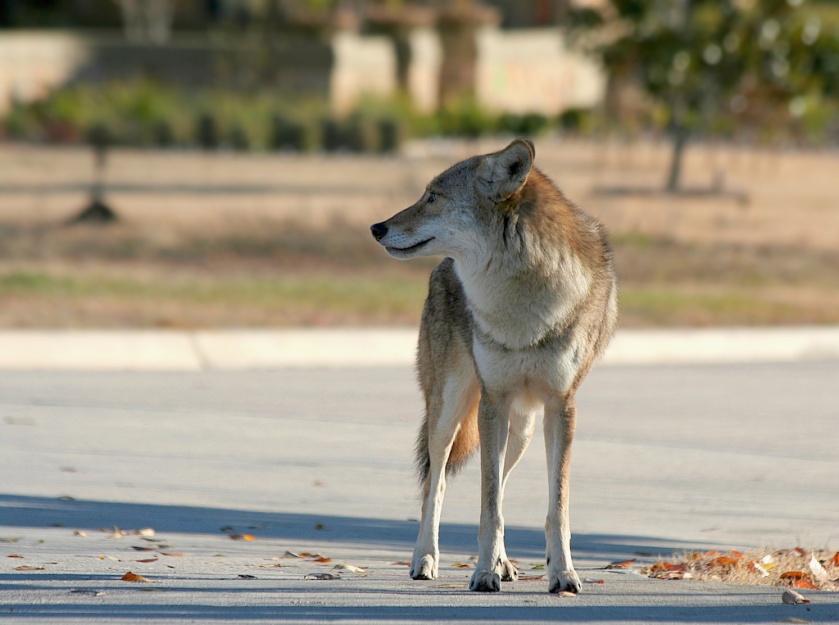 November 1, 2020 Ruth Nasrullah Natural world Comments Off on Coyotes in the distance

This originally appeared on the Armand Bayou Nature Center “Wild About” blog.

We left the forest and walked onto the prairie – two hike guides, a guest family of three, and me taking up the rear. One of the guides had just finished discussing the half moon with the two children along on the night hike. It shone bright in the sky over Armand Bayou.

Then we heard a howl. And another. Then silence, so we kept walking.

A minute later, they began again, now a group of three or maybe four. We shushed each other and listened to the howling. When it stopped, we continued our hike across the prairie.  The kids were a little skittish, but we assured them that the coyotes wanted nothing to do with us. It did feel eerie, though, to be on such wide, open land knowing predators were announcing themselves from not too far away.

I am intrigued by coyotes and had been waiting to hear their voices on the family night hikes for which I regularly volunteer. They are not widely popular animals.  They are a favorite of recreational hunters. There are popular contests around the country in which the hunter with the largest number of kills is crowned the winner. Coyotes are branded as livestock killers, pests, murderers of pet cats, and so on.  I would counter that they are resilient, intelligent, resourceful, and graceful.  They survive just about everywhere, from the Rocky Mountains to the south Bronx.  When their numbers fall due to aggressive hunting, they start breeding at an earlier age, having larger litters and healthier pups, thus rebuilding the population.

No doubt their haunting vocalizations also contribute to negative popular opinion.  Those chilling howls are a staple of Halloween soundtracks. But it’s one of the things I most love about them.

Coyotes make a number of vocalizations, which primarily center around territory and gathering. The first time I heard the classic coyote yip-howl, I was camping alone on the Lone Star Hiking Trail.  In the middle of the night I awoke to hear what I thought was a group of puppies yipping and my sleepy mind couldn’t figure out where on the trail there would be puppies loose in the middle of the night.  A couple days later, I mentioned it to a colleague who looked at me quizzically and said, “Those were coyotes.”

On another camping trip on the same trail, a pack of coyotes sent up a howling symphony which lasted much of the night. You can’t listen to those sounds and not have some emotional reaction, whether fear, wonder, or curiosity.

After my first night hearing yipping coyotes, I was determined to learn more about their vocalizations. Here is a brief decoder of just a few of their sounds:

The group “yip-howl”: This is what I heard that night on the trail.  It’s a way of cementing family bonds and establishing territory.

The group howl: These can have two purposes.  If two or more coyotes come together, they can announce the news with a group howl.  The sound can also be used for one group to call to another.

The bark: This communicates a threat or alarm.  If the threat escalates, the coyote may emit a bark-howl.

It’s remarkable how many sounds coyotes can produce, how meaningful they are, and how they help to forge cohesive bonds within families and outside.  They range from soulful to eardrum-piercing electronic. I, for one, am looking forward to the next time I hear them.

Coyotes: Decoding their yips, barks and howls, in Adirondack Almanack

Coyote Voicings: Howls, Yips and other Vocalizations: A Panoply of Sounds & Situations

Good Nature Travel: Listen to the howls of coyotes, the “song dogs.”

PHOTO CREDIT: “Coyote On Kimball Avenue” by TexasEagle is licensed under CC BY-NC 2.0