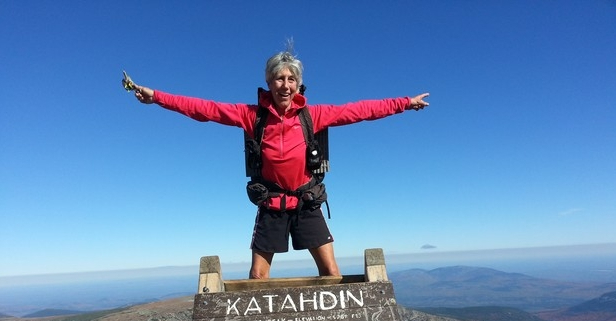 May 12, 2021 Ruth Nasrullah Living purposefully Comments Off on Own the Hot Flashes: Tips for Menopausal Hikers

You may see them infrequently. You may wonder at their skill or endurance.  If you’re the average AT thru-hiker—young and male—you may worry about their safety and health.

Women 50 and over have as much strength and determination as any long-distance hiker. Most of them have faced one of the greatest challenges of a woman’s life: menopause. They may have special needs and concerns, some of which are clinical (potential bone loss) and some of which are a tad icky (urinary leakage).

Let’s explore the experience of menopause and what a menopausal hiker can do to avoid or lessen symptoms. Please note that my focus here is on menopause that occurs naturally. Women who enter menopause for reasons such as surgery or illness may have issues that go beyond the scope of this article.

A woman is considered to be in menopause when she has gone 12 consecutive months without a period. Although menopause is commonly used to identify the phase during which a woman’s periods become less frequent (as in “going through menopause”), that phase, which may last for several years, is correctly referred to as “perimenopause.”  A menopausal woman is one whose periods have stopped permanently.

With the cessation of periods comes a drop in estrogen hormones, which among other roles regulate a woman’s reproductive cycle. The low level of estrogen may lead to symptoms that include hot flashes, night sweats, palpitations, headaches, insomnia, fatigue, bone loss, or vaginal dryness. Fortunately, not all women experience these. Supplemental hormone therapy may help reduce these symptoms. Ask your doctor about the possibility of hormone therapy, especially if you are setting out for a lengthy hike, such as a thru-hike or long section.

“Buzzcut” wrote on The Trek in June 2017 that night sweats – hot flashes that occur during the night – caused particular challenges for her during her AT thru-hike attempt. Her daytime clothes were soaked from rain, and because of her night sweats her sleep clothes also got drenched. She wrote: So now, through the night I went from being cold to wet and cold alternating several times a night = piss-poor sleep.

On the other hand, Jane Ferrall, a 60-year-old hiker from Connecticut, found a way to embrace her hot flashes, especially the nighttime occurrences.

“When they started, I decided what I’m going to do is say they will keep me warm,” she says. “I’m a cold sleeper anyway.”

What do experts advise if you’re tormented by these sudden surges of heat? The Mayo Clinic offers suggestions such as avoiding hot and spicy foods, caffeine, and alcohol. They note that there are medical remedies for hot flashes, including estrogen supplements or low doses of certain antidepressants. Acupuncture may also help.

Meditation may help you get through the hot flashes when they happen. Diane Spicer, who runs the Hiking for Her website, recommends this technique.  Her hot flash mantra: Heating up.  Let it go.  Boiling over.  Let it flow.

Try her mantra, or develop one of your own. Mind over hormones!

Will Sticks and Stones Break Your Bones?

According to Dr. JoAnn Pinkerton, executive director of the North American Menopause Society, women can lose up to 20 percent of their bone density in the first five years of menopause.

“Adding intense exercise to ongoing bone loss could put those women at higher risk of fracture,” she says. “The good news is that strength training helps build bone density.”

Nutrition expert Dr. Brenda Braaten emphasizes the importance of calcium supplements – not just with menopause, but before, and not just on trail.

“Every woman should have a bone scan pre-menopause to check calcium and bone density, and her doctor’s recommendation should be made on the basis of that,” she says. “The unfortunate news is that regardless of calcium intake, with the loss of estrogen, calcium levels and bone density will decline. The best insurance is to have plenty of calcium pre-menopause.”

In addition to supplements, certain foods are good sources of calcium, but not necessarily the traditional staples of a thru-hiker diet.

“The typical diet of starches and dehydrated foods will not provide adequate amounts of calcium, vitamin D and magnesium to help preserve bone density,” Pinkerton says. “Therefore, supplements or food fortified with calcium should be considered.”

Some calcium-rich foods that are generally accessible on trail include milk (powdered or liquid), nuts, hard cheese, and dried salmon.

This originally appeared in The Trek.

Today I took a walk through the night hike route at @armandbayounaturecenter but for the first time during the day. I was amazed how different it looked.
I went on two interpretive hikes yesterday - in the morning at the #LakeCreekPreserve in Montgomery County and in the evening at @armandbayounaturecenter , where I took another couple photos of the newly uprooted tree I photographed last week. (The first six photos here are from Lake Creek.)
Reúnase con Vaccinate Your Family (Vacune a Su Familia) y Día de la Mujer Latina el lunes, 20 de Septiembre, a las 11AM ET. Nos acompañará el Dr. Ilan Shapiro y responderá a sus preguntas sobre las vacunas contra COVID-19 para adultos y jóvenes, y cómo podemos protegernos contra la gripe este invierno. https://fb.me/e/48ELTvZfR
I was up at 1 am last night listening to Hurricane Nicholas pass over. The wind was so strong I was moved to record it. We decided this afternoon that the sound you hear at about 10 seconds in must have been the window screen. The heavy wind and sideways rain finally stopped at about 4 am. #hurricanenicholas
Just a few random shots from last Saturday’s night hike at @armandbayounaturecenter . We saw more wildlife on that hike than I ever have in all my time as an assistant guide, including a bunny in the forest, a doe, bats, night hawks, frogs, gators, golden orb weaver spiders and another species I’m not sure of, moths, and barred owls. You should try a night hike some time! More info on their website abnc.org.
I was happy to find out this morning that I was accepted to @nbcuacademy at #spj21. It definitely looks like subjects and skills outside my wheelhouse, so I’m really looking forward to it! #neverstoplearning